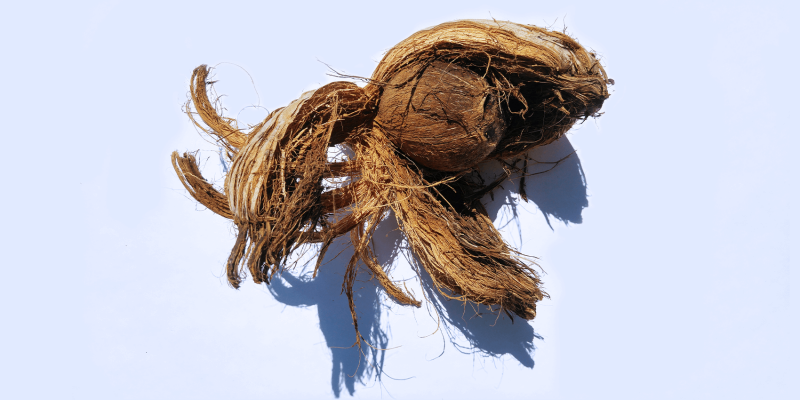 If you have any allergies or know people that do, you know how important it is to always read the ingredients and product labels. This goes for both food as well as for cosmetic products. And it can even go beyond that. Earlier this year I was on the plane to Morocco when the…

If you have any allergies or know people that do, you know how important it is to always read the ingredients and product labels. This goes for both food as well as for cosmetic products.
And it can even go beyond that. Earlier this year I was on the plane to Morocco when the flight attendant announced that there was a passenger on board with a severe nut allergy.
The airline ceased to sell all food containing nuts during the whole flight. They also asked all passengers to avoid consuming any food they brought with them that could have traces of nuts.
I thought it would be interesting to address this subject here and take a closer look at coconut allergy. Specifically: can you eat coconut with a tree nut allergy?

Unlike what their name suggests, coconuts aren’t nuts, but fruits. They are part of the drupe family which are fruits that exist of 3 layers; an outer layer, a fleshy middle layer and a hard layer that surrounds the seed.

Some other drupes are mangoes, olives, peaches and plums.

When it comes to allergies, nut trees are considered to be major allergens.

Even though coconuts are not nuts, the Food and Drug Administration in the United States includes them in their list of nut trees. This is not only inaccurate, but also very confusing.

Coconuts do not appear in the European Union’s list of major food allergens.
Also in Australia and New Zealand, they are not part of the list of nut trees.

Can you eat coconut with a tree nut allergy?

Dr. Sicherer is an allergist, clinical researcher, professor of pediatrics, Chief of the Division of Allergy and Immunology at the Icahn School of Medicine in New York. The author of the book “Food Allergies: A Complete Guide for Eating When Your Life Depends On It.’’ explains the following:

‘’Despite its name, coconut is not actually a nut, but a fruit. Regardless, the Food and Drug Administration considers it a tree nut, which is why it’s included in U.S. labeling laws.
It is difficult to assess the risk of coconut allergy among those with tree nut allergies because allergic individuals may become wary of coconut and avoid it.
Still, coconut allergy appears rare, and uncommon even among those with tree nut allergies.

Your allergist would consider your personal allergy history in deciding whether to add coconut to your diet or to perform any testing. However, be aware that tests are often positive to coconut in people who could actually tolerate it, so a physician-supervised feeding test may be necessary for a conclusive answer.’’

The Anaphylaxis, an organization in the United Kingdom that supports people at risk of severe allergies explains:

‘’People who are allergic to tree nuts sometimes ask us if they are likely to react to coconut because of the name. Foods that are close biological relatives often share similar proteins, which can lead to a process called cross-reactivity. This is where a person allergic to one food also reacts to another.
But the coconut is a member of the palm family and only distantly related to tree nuts.

Rare exceptions have been reported in scientific research papers. Two people allergic to walnuts were found to react to coconuts due to a cross-reacting protein (Teuber and Peterson, 1999).  Another person who was allergic to coconut suffered symptom of oral allergy to several tree nuts.
A cross-reacting protein found in both coconut and hazelnut was identified as the cause (Nguyen et al., 2004).’’

The article further states: ‘’The medical reviewer of this article, who works in a busy NHS allergy clinic, occasionally sees patients who had been mistakenly advised that they were allergic to coconut due to the misinterpretation of the results of a popular allergy blood test.
The test is called ImmunoCAP fx1 Mixed Nuts and it is available to GPs in some areas.
It checks to see if one or more nut antibodies (specifically peanut, hazelnut, Brazil nut, almond or coconut) is present in the blood serum.
If the test is positive, it indicates an allergy to at least one nut, but it does not mean that the patient is allergic to all of them. In order to confirm this, a separate test to each nut should be carried out. However, not all NHS laboratories do this as a matter of routine when the test is positive unless they have been specifically asked to do to so.

As explained in this article, you can indeed eat coconut with a tree nut allergy. But if you notice that you have a strong reaction to coconut, make sure to have this tested.
Although very rare, coconut allergy can occur. If you find yourself to be sensitive to coconut, discuss this with your medical doctor. Make sure to carefully read all product labels of both food and cosmetics, until you know more about a possible coconut allergy.