Why coconut is called the tree of life 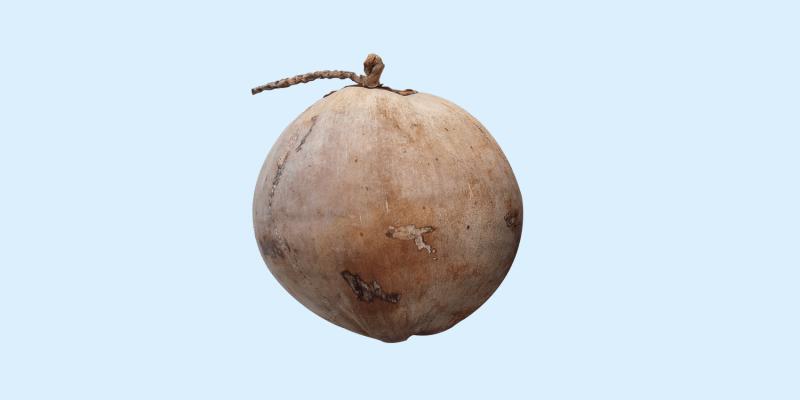 Why coconut is called the tree of life

When we think about coconut products, some of the first things coming up are coconut water, coconut oil and coconut milk. Each of them is wonderful in their own way and packed with health benefits. But did you know that every single part of the coconut can be used for something? From coconut flower,…

When we think about coconut products, some of the first things coming up are coconut water, coconut oil and coconut milk. Each of them is wonderful in their own way and packed with health benefits.
But did you know that every single part of the coconut can be used for something?
From coconut flower, coir, husk, shell, meat to water: coconuts provide us with so much goodness.
Let’s take a look at the many amazing uses of the coconut palm and why it’s known as the tree of life.

It takes about 6-10 years for the coconut palm to grow its first coconuts. The growth process from flower to mature coconut takes about 1 year.
It can take anywhere between 15-20 years for the palm tree to reach its peak stage of production and under optimal conditions it can produce up to 100 fruits per year.

Coconuts are in season all year long. 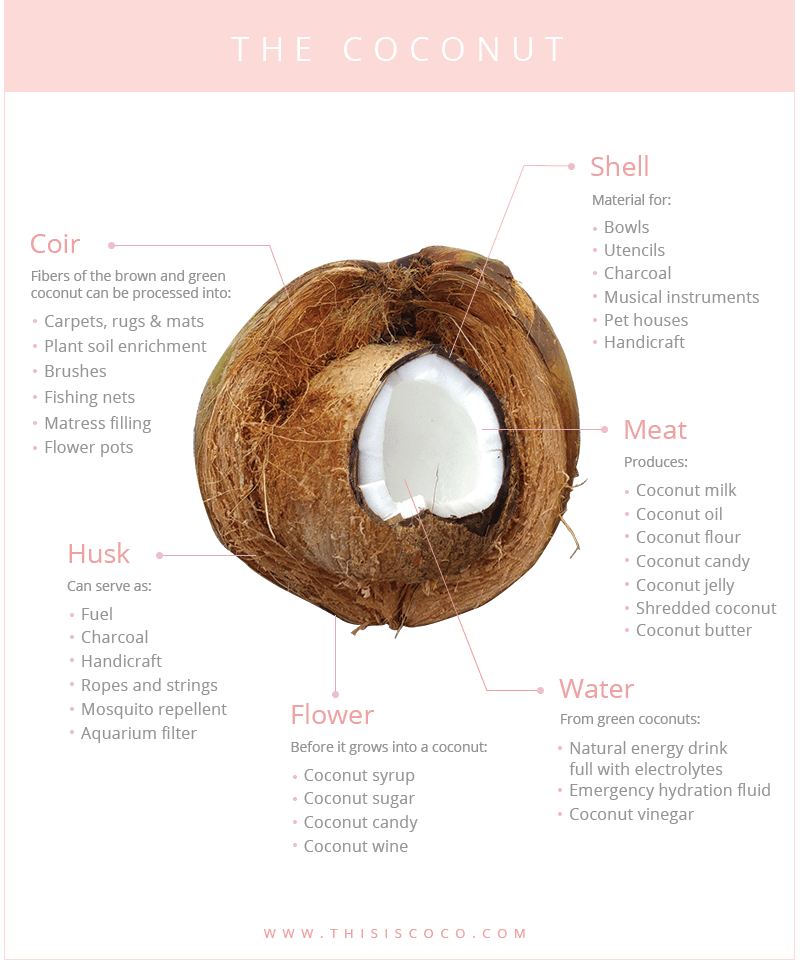 This is the part of the coconut between the outside layer of the fruit and the coconut shell.

Coconuts come in different shades of green and brown depending on the age of the coconut.
The older the coconut, the drier and browner it will be.

The coir also changes properties according to age:

The fibers from the young coconut are very suitable to produce fishing nets, brushes and strings.

The coir of mature coconuts is used to produce ropes.

Coconut coir is used as mattress filling for natural, sustainable mattresses. These high-quality, healthy mattresses are very durable and comfortable. Plus they allow the air to pass through.

Coconut coir is also a popular material in gardening. It’s an excellent plant soil enrichment and growing medium.
It’s sustainable, has a good pH level, is easy to work with, retains a lot of water and is resistant to rotting.

Besides in gardening, it’s used to produce flower and plant pots.

Do you know those typical brown doormats? They are made from coconut fibres and so are some carpets and rugs.

Coconut husk is good fuel an you can use it instead of materials such as wood. It has a pleasant smell and has purifying properties.

Activated charcoal has become very popular in recent years. It’s used to naturally whiten teeth and in face masks.
This black powder is mixed with other ingredients such as coconut oil and helps remove stains from teeth.
Charcoal can also be made from coconut shell.

Coconut husk is popular for handicraft, as a filter for aquariums and terrariums. It can also help repel mosquitos.

You might have seen those beautiful coconut bowls used to serve smoothies and other food in. They are a great example of the coconut as the tree of life. The shells would have otherwise been thrown out, but with a bit of finishing they make a unique, natural, sustainable bowl instead. Perfectly, imperfectly shaped by nature.

You can also make spoons and other utensils from this material.

Coconut shells are also used to make musical instruments, handicraft and houses for little pets who love them. 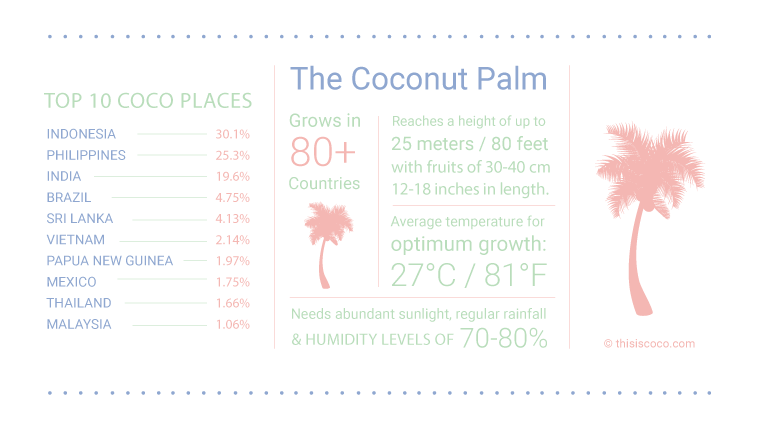 This is the part that grows into a coconut.

The juice from the flower buds is heated to make coconut syrup, a natural sweetener.

This is the clear liquid found in green coconuts of between 6-10 months old.
The taste changes according to the age of the coconut; the older the sweeter.

Coconut water is very hydrating and nutritious. It contains electrolytes, important minerals such as magnesium, potassium and calcium which are essential for the balance of fluids in our body.

Very young coconuts contain only water. When the coconut is about 7 months old, it starts to form soft meat known as coconut jelly. It’s very tender and tasty.

Read about these 23 healthy coconut products in this article.

More coconut uses of the tree of life

The leaves from the coconut palm are used to make hats, baskets, roofs, food trays, home accessories and disposable plates.

Coconut palm roots have traditionally been used for medicinal purposes, to make toothbrushes, as natural dye and mouthwash.

The trunk is used to make furniture and to build houses and boats with.
The wood is a very sustainable material, because they only use it once the coconut tree has reached the end of its productive life after about 60-75 years. The palms are then cut down as by then they are very heavy and there is a risk that they will fall.
The older the coconut tree, the firmer and denser the material.
Cutting down a younger tree would not even work, because the wood has not yet developed itself sufficiently. How smart is nature, right?

The coconut is a true gift from nature and rightly named the tree of life.
Coconuts have been an important part of human life throughout history. They represent a valuable source of food, drinks, shelter, fuel and livelihood in many parts of the world.

Products such as coconut water and coconut oil have become very popular.
It’s good that more people become aware of the coconut’s wonderful properties and have access to these products.
At the same time we need to stay mindful about the importance of sustainable, ethical coconut production so that many more future generations can benefit from this amazing plant known as the tree of life!